The origin of Cal Coast Orchids was more than a dream — it was embracing a legacy. Read more to learn how. 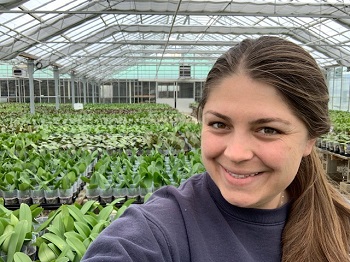 The origin of Cal Coast Orchids was more than a dream — it was embracing a legacy. Born and raised in the Netherlands, company co-founder and head grower Bas van Eijk remembers spending his entire childhood in greenhouses. His father has always tended to his own impressive vegetable and rose garden; his father before that was a cucumber farmer, and his father before that was a cow farmer, as was his father before that, and his father before that–you get the picture. Generation upon generation of horticulturists and agriculturists encouraged Bas to work for several Phalaenopsis orchid growers on Dutch soil before pursuing a degree in Crop & Farm Management. As a young and ambitious 21-year-old with an education under his belt and an inherited passion for growing, Bas took a leap of faith moving to New Zealand to explore the orchid industry more deeply and lean into his van Eijk heritage. 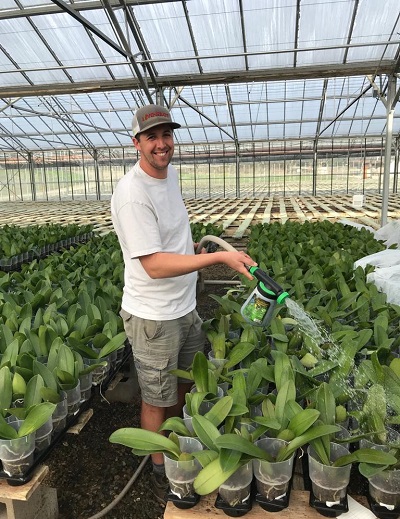 In New Zealand, Bas was tasked with reviving a struggling Phalaenopsis orchid production that was prepared to shut down their greenhouses. After implementing his own sustainability plan and crafting a Phalaenopsis handbook for the company, they have successfully continued to cultivate these plants–ten years later. Bas’s international efforts allowed him to realize the possibility of increased margins in a global market; this business incentive, paired with a soft spot in his heart for California and an even softer spot for a girl who lived there, turned his attention to the warm climate and sunny coasts of Santa Barbara.

Bas van Eijk and Alison Glasco went on their first date in 2013 upon his arrival in the United States. The homegrown farmer and Los Angeles native shared a romance that quickly blossomed into a happy marriage, and their shared interests sparked a dream that they could achieve together–Cal Coast Orchids. Bas worked for an orchid grower located in Carpinteria, California as they started building a life together, and then the pair pursued an opportunity in Virginia before returning to the Central Coast with a plan to start their own business. With Bas’s extensive background in horticulture and Alison’s landscaping experience and schooling in the sciences, the couple was well-prepared to begin.

The mission of Cal Coast Orchids was clear from the beginning: to produce sustainably-grown, beautiful orchids of the highest quality for its customers. So, they set their sights on Los Osos, California due to the area’s remarkably ideal climate for growing Phalaenopsis, along with the availability of some of the soundest greenhouses in SLO County. And now, they’re doing it! Bas and Alison work to brighten homes all over California by utilizing sustainable growing initiatives, sharing accessible orchid care for both wholesale and retail customers, and guaranteeing the highest quality orchids on the West Coast. Cal Coast Orchids emerged from an ancestry cultivated in Dutch soil, and has found its new roots in American bark.

“I am so, so proud of what Ali and I have created. We truly want to make a difference–a difference in the quality of orchids in the U.S. market, and a difference in how people can be confident in caring for their plants. The best part is that we’re doing it together.” — Bas van Eijk, Co-Founder & Head Grower

Cal Coast Orchids is a family-owned small business that draws from generations of Dutch agriculture to produce sustainably-grown, beautiful orchids of the highest quality for its customers–all in American bark. Get to know the team who makes it happen!

Bas was born with a green thumb and has honed that skill his entire life. The oldest of three brothers in a small town in the Netherlands and a descendent of a long line of Dutch farmers, he grew up helping his father and grandfather in their greenhouse and playing soccer in his free time. After earning his bachelor’s degree in Crop & Farm Management in Holland, Bas moved to New Zealand to provide support for a Phalaenopsis orchid company before heading to the United States, where he gained experience growing Phalaenopsis on both the east and west coasts. He married Ali (Co-Founder & Director of Operations) in the middle of it all, and they came together to make their shared dream of Cal Coast Orchids a reality. As a co-founder and the Head Grower at Cal Coast Orchids, Bas keeps a close and keen eye on the health of the plants using sustainable methods, and ensures that the orchids you see in your local store are vibrant.

Bas lives with his wife Ali and their two dogs, Rocky and Echo, in Los Osos nearby Cal Coast Orchids headquarters. In his free time Bas enjoys going on ski trips, watching Eredivisie (the Dutch soccer league), listening to (very loud) House music, and taking his family to the beach for bonfires.

Alison Glasco was born and raised in Lomita, California, a small town in Los Angeles County. She received her B.S. in Engineering Physics from Westmont College in Santa Barbara and worked for a distinguished landscaping company in Montecito before marrying Bas (Co-Founder & Head Grower) and kicking off her career in the orchid industry at a Phalaenopsis company in Virginia, where she spearheaded partnerships with wholesalers and gained valuable experience in business development. Once the couple returned to California, Ali dipped her toes into the Central Coast wine industry and learned the ins and outs of customer care before forging on to the development of Cal Coast Orchids. As a co-founder and the Director of Operations, Ali’s superpowers span from monitoring the day-to-day efficiency of Cal Coast to securing growth and development opportunities.

Ali lives with her husband Bas and their two dogs, Rocky and Echo, in Los Osos nearby Cal Coast Orchids headquarters. Between managing her family’s business and learning to speak Dutch, Ali still finds the time to indulge in other things she enjoys, including cooking, wine tasting, interior design, and visiting her family in Los Angeles.

Sarah Glasco grew up in Lomita, California with her older sister Ali (Co-Founder & Director of Operations). As a child, she discovered her love of caring for plants by helping her mom with the garden in the backyard. Sarah earned her B.A. in English & Writing at Westmont College in Santa Barbara while working in publicity at a local firm, and then transitioned to a career in sales and customer service at an established aerospace company in Goleta. She provides valuable support to the Cal Coast team through her blended experience in public relations and sales.

Rocky and Echo are valuable additions to the Cal Coast team. When they aren’t busy patrolling the greenhouses, they enjoy chasing squirrels, taking naps in the sunshine, and effortlessly boosting team morale.


We Deliver and Ship all over California!